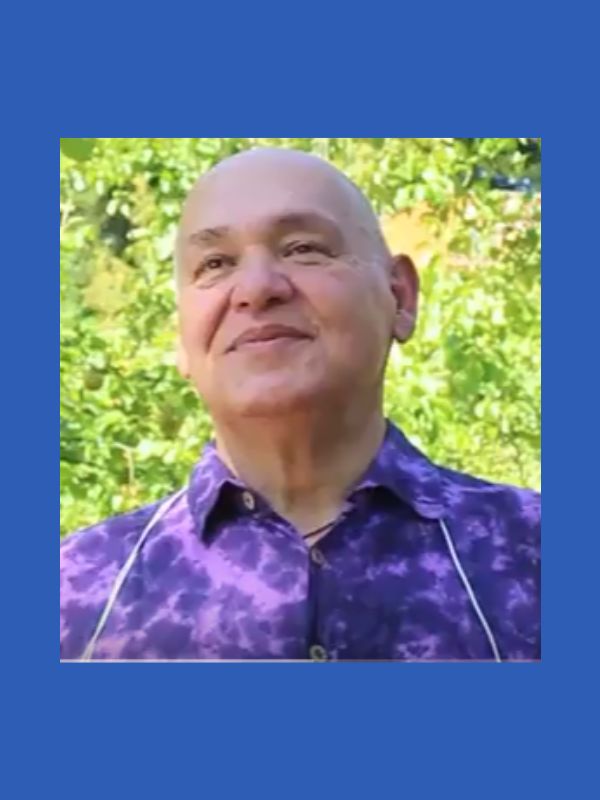 Hey Everyone! This is a big day for this cthucc.org website and newsletter that supports it. It is a big day because we are letting you in on big plans.

Starting with May, 2022, there will be a weekly blog post for each one of you to get involved with. Each weekly posting is a new chapter in an ongoing novel and here is the premise for this novel

Seventy thousand years ago, homo sapiens oozed out of Africa and out into Western Asia and Europe. Each small band that dribbled out existentially convinced that they were permanently and irreconcilably at war with all other humans, with animal life, and with nature itself.

That orientation has never left the species, culminating in the world we live in now. A world on the edge of extinction because of climate change which after thirty years of ever more urgent dire warnings, we as a species have never been able to fulfil our promises of reform made to one another. Compounded as we enter our third year of viral plague, and further complicated by a savagely callus, all out” Me win – you die” war in the heart of Europe. Not to mention a half dozen other wars going on in less supposedly civilized parts of the globe.

The document that follows is a novel, set some fifteen hundred years in a future where the powers of our time failed utterly, and humanity nearly went extinct. Only denizens of far southern lands had survived, and these people scrambled to stave off starvation each and every day. The landforms have changed, most of the flora and fauna wiped out. Traditional indigenous wisdom made useless. The mutant gene burden on the surviving population so high that more infants are exposed to the elements each generation than are nurtured and taken into families, such as these were. Only the arrival, after more than a thousand years of this of space vessels of an alien empire broke the cycle. These creatures were pleased to provide food sufficiency and healing of disease in exchange for labor. Thus, the vast majority of humanity’s remnant became slaves of an alien empire. True to form, all humans resented this bargain, but only a handful organized as a conspiracy to attempt, somehow, to wriggle free.

Why is such a novel being featured in the blog of a small Christian community? Especially as much of the rest of this community’s blog space is devoted to clarifying what many people regard as abstruse theological subjects. Using close examinations of Hebrew, Greek, and Roman Imperial history and language to debunk many widely held beliefs about what Christianity is all about?

The answer is straight forward and simple, yet still seems odd to conventionally Christianized eyes and ears. Jesus’ entire mission was devoted to bringing people on board to one idea, one project, one goal which he called the Kingdom of God or of heaven. Not to any idea that people should worship him, which, evidenced by his retort “Why do you call me good? Only your Father in heaven is good.” This kingdom project was always closely linked to the forgiveness of sins.

Please remember, that though there are indeed a list of crimes, like murder, theft, and bearing false witness that were considered sins in Biblical times, the main or generalized concept is one of falling short, and that the principal shortfall to be avoided is always “Separation,” of human from human, human from the rest of creation, and/or human separation from God. Thus, seeking the Kingdom of Heaven is precisely the cure for that seventy-thousand-year-old attitude featured at the top of the preceding page.

Our story opens on a distance shrouded planet in a star system unimaginably far away, called New Beginnings, where this conspiracy has established a toe hold.

Thomas C. Chavez is a blind artist. Before losing his eyesight in a tragic auto accident he had written several books on health and poetry. His researched writings concerned human phenomena dealing with health, mind, spirituality and the metaphysical nature of human consciousness. His writing describes how these elements amazingly tie into a miraculous communication with God the Creator.

At the age of four, Thomas Chavez began meditating. He soon learned to transfer his thoughts onto paper, scripting a kind of ‘visual poetry’ with a nibbed ink pen, producing thousands of line drawings with the same kind of intensity Vincent Van Gogh had with his oils.

Today Chavez’ enthusiasm has been reawakened by the infinite possibilities of graphic expression using watercolor paintings and pencil and ink using his unique “Blind-Sighted Vision” to go beyond mere eyesight into the metaphysical world beyond.

With the help of a sighted assistant Chavez is able to discern by his fingers, a handheld brush and verbal direction to make his own choices of color and positioning on paper his unique creations of art. With a variety of brushes, he can see his works in his mind as his loaded paint brush is placed wherever he wishes, using basic watercolors on wet or dry paper. His creative energy has been thus freed from external inhibitions, limited only by his own imagination and messages.

Like Van Gogh, Thomas Chavez’ works are not profit driven; his wish is to have others enjoy these special works, even passing it on to others who may see his visions. Donations for his prints will go to furthering the foundation he and his wife, the Rev. Gabrielle Chavez have created to advance learning and healthful living and eating choices, the Climate Café on the CthUCC.org website. A suggested donation for an 8 inch by 10 inch, Thomas Chavez fine art reproduction print, personally signed by Thomas, is to help cover production costs and to further the Climate Cafe’s success. 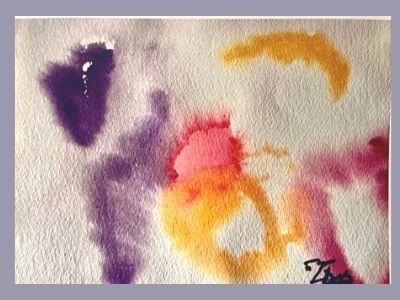 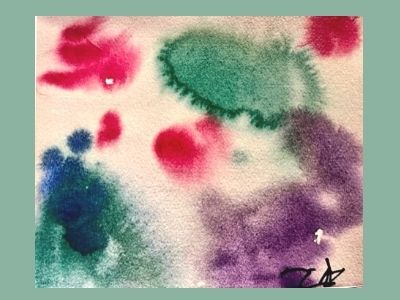 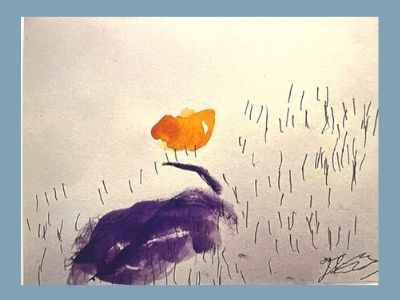 Your donations are welcome. Be in touch with the artist here.